← more from
Memphis Industries
Get fresh music recommendations delivered to your inbox every Friday. 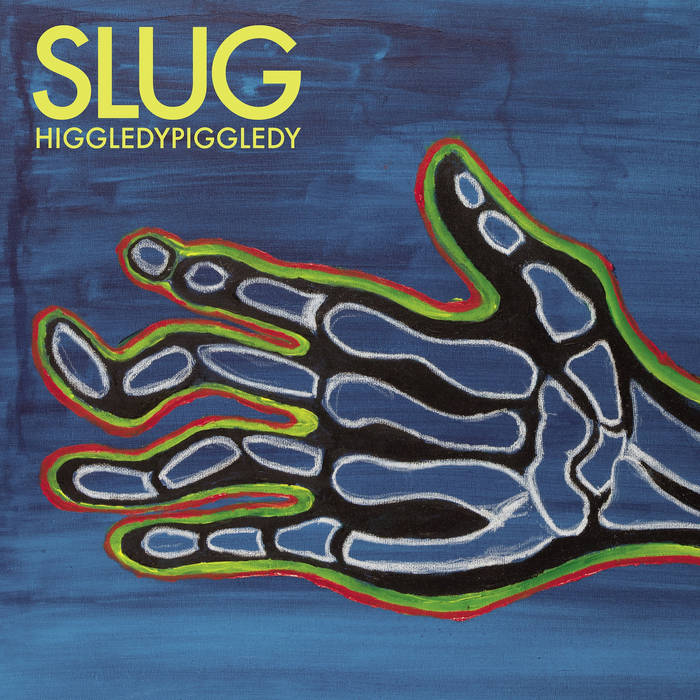 Sven B. Schreiber (sbs) I've never heard of Ian Black, nor of his music project "Slug". Too bad, because he creates awesome music for a couple of years! Meanwhile I've learned that he was the touring bassist of "Field Music" around 2010. In fact, the Brewis brothers have produced his 2015 debut album "Ripe". It's not a surprise that good music arises from such a fertile environment. Favorite track: Petulia.

Whereas previous album RIPE was made in collaboration with Peter and David Brewis of Field Music, HiggledyPiggledy was composed, produced and played entirely by Black enabling him to give free reign to his beguiling brand of Dada-rock.

Black taught himself how to produce while making HiggledyPiggledy, by all accounts a terrifying process that drove Black to the edge of sanity. To function he imagined himself variously as Lindsey Buckingham making Tusk, Eno producing Another Green World and Tod Rundgren laying down A Wizard A True Star. In so doing Black was able to keep an equilibrium and make the record making experience experimental and spontaneous.

The album was inspired by a combination of The Residents, John Carpenter and the soundtracks of Don Cherry (particularly Holy Mountain) and Masahiko Sato (particularly Belladonna) plus the Dada art movement which will be self evident to anyone who’s seen the hilarious and life affirming SLUG live experience, replete with ever changing stage wear (snooker players, sailors, 50s jazz combo) and spontaneous crowd participation.

Black intended HiggledyPiggledy to be a more minimal affair than previous album RIPE, focussed more on rhythm and percussion. Thematically the record was written against the backdrop of political turmoil but really it’s about the strange life Black leads in his native Sunderland, an autodidact outsider living his life in Wetherspoons arguing with some of the questionable attitudes of locals. Black’s stated aim to “have fun writing truly horrible lyrics”, playing characters “venting in pubs, writing in the character of how some people think and behave”.

HiggledyPiggledy begins with first single ‘No Heavy Petting’ (the title taken from the dos and don’ts at Blacks local swimming pool), consciously written to be an aggressive album opener with and which pokes fun at Blacks own Mary Whitehouseish response to the sexualisation of TV. ‘Lackadaisical Love’ is another album highlight, one big 4/4 drum beat, fuzzy guitars like Maggot Brain-era Funkadelic, steel drums and fat moog bass. “A song about sex funnily enough” says Black. Other noteworthy songs include “Dolly Dimple”, a song about the pornography of wealth, power and business all dressed up like a late 70s Bowie record and the Suicide meets Sliver Apples of “Arbitrary Lessons In Custom” about “how we lose touch with people and friends we love and the slow burn of how it happens”.

The results whilst punchy and direct remain rich, strange and sometimes unsettling. HiggledyPiggledy, then is a perfect intro to the wonderfully weird world of SLUG.

Bandcamp Daily  your guide to the world of Bandcamp

Kari Faux drops off her deluxe album 'Lowkey Superstar' plus tunes by Shunaji and Samplelov.